Home > News > What Are Ball Bearings? 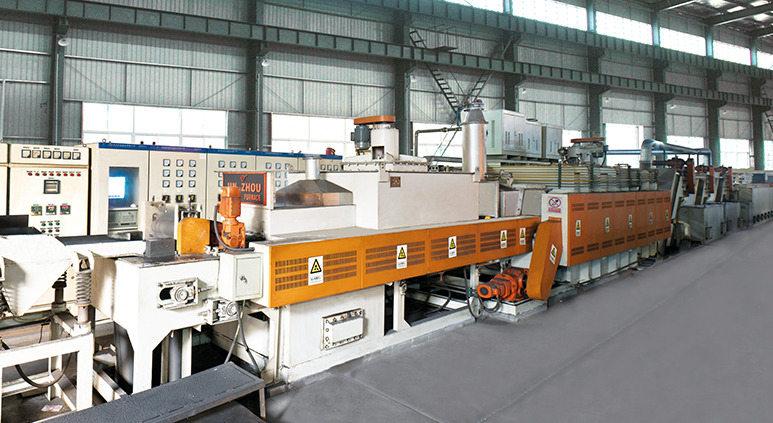 What Are Ball Bearings?

As one of the most commonly used bearings of all time, ball bearings are used in a plethora of applications, as their simple design makes them highly versatile. Often used as wheel bearings, they can be found in cars, bicycles, skateboards, and different types of machinery in almost every industry.

Ball bearings are used to reduce rotational friction between two objects. Comprised of one or more rows of balls between an inner and outer raceway, they capitalize on the concept that rolling elements produce less friction than sliding elements. By utilizing balls to roll around the bearing instead of having two surfaces slide against each other, they can facilitate high rotational speeds with extremely low friction. The invention of the ball bearing lead to many similar bearing designs, such as roller bearings, which feature other types of rolling elements instead of balls.

Generally, bearings need to handle axial and radial loads. Axial, or thrust, loads are forces that act parallel to the bearing axis, and radial loads act perpendicular to the bearing axis. Ball bearings can withstand both of these types of loads, giving them high versatility. However, the spherical nature of the balls creates extremely small metal-to-metal contact points within the bearing, which allows for smooth motion, but limits the carrying capacity of the bearing. Ball bearings are typically used in applications with relatively light load requirements. 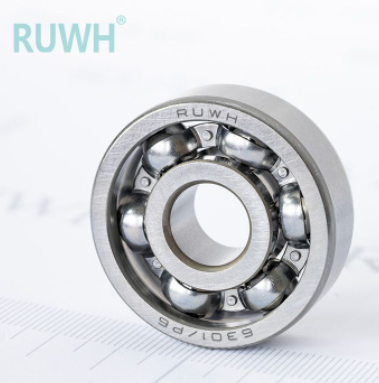 Features and Components of Ball Bearings

As stated before, bearings are comprised of a few different parts: the inner and outer rings, the cage to hold the balls in place, and the balls themselves. These components are typically made of stainless steel, chrome steel, or ceramic. Cages can also be made of polyamide plastic to reduce production costs, however this can degrade bearing performance or capabilities at high temperatures. Steel is the most common material for bearing construction; ceramic is used for applications with strenuous or unusual conditions, as it resists corrosion and does not require lubrication. Hybrid bearings feature steel rings and cages and ceramic balls, which reduces friction and weight of the bearing.

As with any bearing, there are a variety of types of ball bearings that are used for different applications:

ㆍDeep groove ball bearings: Deep groove bearings feature, as the name implies, deep raceway grooves; the inner and outer rings have arcs slightly larger than the diameter of the balls. This design is excellent for high speed applications, and can handle high radial loads and axial loads in both directions. It produces low friction, temperature, and noise during operation, making it highly versatile for a variety of industries. 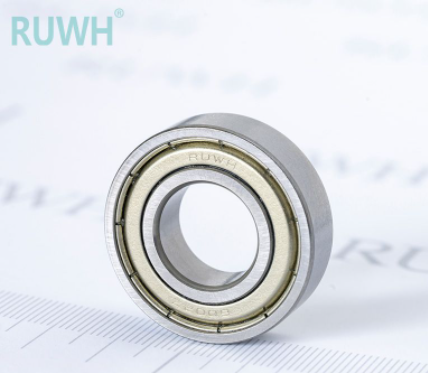 ㆍThrust ball bearings: These feature washer-like rings, and can only handle axial loads, giving them more limited usability. However, they can be designed to withstand thrust loads in both directions, as well as accommodate misalignments using aligning seat washers or spherical aligning seats.

ㆍFour-point contact ball bearings: The inner ring of these bearings is split into two pieces, giving the balls four contact points with the raceways. This unique design allows these bearings to accommodate axial loads in both directions, as well as radial and axial loads simultaneously. Designed for more strenuous conditions, they can handle high load capacities compared to angular contact bearings. They also eliminate the need for multiple bearings, being more space-effective than double row bearings. These bearings are most suitable for low to moderate speed applications with high oscillatory movement.

ㆍSelf-aligning ball bearings: These bearings comprise two rows of balls, an inner ring with two deep raceway grooves, and an outer ring with a spherical raceway. While they are limited in load capacity, they are capable of correcting misalignment that occurs during operation. This makes them highly suitable for applications with long shafts such as transmissions or textile machinery. They also are used in a variety of other applications due to their low friction coefficients, low maintenance requirements, and high-speed performance.

ㆍPrecision ball bearings: These are ball bearings that are constructed to provide vastly improved performance for a highly demanding application. Optimal materials and construction produce increased performance levels at high speeds and in challenging conditions. They are typically used when high precision, rigidity, noise reduction, operating life, or friction reduction is necessary, such as in aerospace, robotics, or medical industries.

We are a deep groove ball bearing supplier. If you are interested in our products, please contact us now!

Next: Journal Bearings vs. Ball Bearings - What's the Difference?